There is a certain drift among contemporary Japanese artists that focus on poetic playfulness, humbling simplicity, as well as a detachment from strict representation. Their artistic practice often revolves around minimal and visually whimsical interventions into the structure of remnants of the past without separating from tradition and continuity. The disaster that hit Japan on the 3 March 2011, brought by the magnitude 9.0 Tōhoku earthquake, resulted in a society shattered by the unpredictability of life. Surprisingly, this enormous catastrophe breathed new life and hope into the ordinary life of many of Japan’s artists and emphasised the end of the Neo-Tokyo flamboyance. The Japan of the everyday was awakened.

The timelessness and transitory character of life can be observed in the works of Saya Kubota (b. 1987), whose artistic practice focuses on hints of the past (re)stored in the archaeological and antiquarian objects acquired from diverse sources. She later transforms these in unexpected and visually evocative ways. Currently exhibiting in Daiwa Foundation in London, this collection of unprecedented objects titled ‘Material Witness’ reminds us of a cabinet of curiosities; a visual palimpsest of the past, the present and the future. Rather than restoring objects to their original appearance, Kubota rejuvenates their faded patina and cracked surfaces with precious crystals and gold leaf – a process that deconstructs their meanings and gives them a new, ambiguous life. Her art escapes a specific time-frame and drifts somewhere in between the old and the new, the familiar and the unknown, the lost and the found. 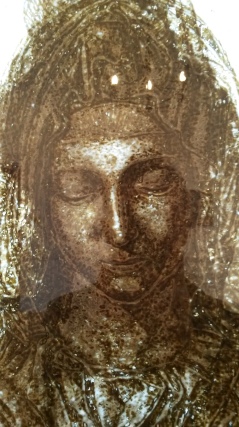 Take, for example, ‘Material Witness #1’, consisting of a light box and incense-burnt tracing paper that depicts the poised face of a goddess. The portrait draws the spectator in with its overlapping outlines, which reveal not one, but five portraits of goddesses representing different iconographies. On another antique oil portrait, a wide blindfold made of Swarovski crystals conceals the gaze of an unidentified sitter, evoking an uncanny feeling of an otherworldly hide-and-seek game. Not far away, a small tortoiseshell half covered in gold leaf sits under a glassy dome. The materials used by Kubota are precious and glittery. They embellish the flotsam, as the artist says, to pay respect to the ancestors. Expanding from their physicality, these alluring objects evoke memories and stimulate our imagination but altered from their historical origin, they exist without any pretence to symbolic reading. They simply are and their resilience comes from their transformation. This is best epitomised in ‘Material Witness #7’, a piece that is a triumph of imagination and lightness. Placed on a glossy mantelpiece are golden binoculars with false eyelashes attached at the front and sharply-ended Swarovski crystals on the other side. Beautiful and surreal, this highly sensorial object seems to have morphed with the body of its owner. Inspired by a memory of her granddad and the mechanical noise made by his artificial leg, Kubota creates an object that is a ‘jewellery of the future’ and as the curator of the show, Eiko Honda, explains, if we inserted the crystals into our eyes, the boundary between the flesh and the non-body would vanish. It also hints toward the lesser-known disturbing history of Swarovski crystals, used in rifle scopes and drilling machinery.

Though Kubota’s art isn’t directly inspired by the tsunami, she confirms that it had a tremendous influence on the lives of the Japanese, for whom the spirit of community and fortune’s follies have become significant. Driven by pure coincidence is the second part of the exhibition documenting the ongoing project Missing Post Office that originated on the small Japanese island of Awashima. When visiting the island, Kubota came across an abandoned post office. This sparked an idea to transform it into a place for all memories and thoughts that do not have an addressee. Anyone can post letters here and while awaiting their delivery to an unknown destination, they are taken care of by a postman, Mr Nakata, who places them in shiny letter holders mounted on a turntable covered in mirrors. When he moves it, the machinery sounds like waves of the sea. This brings back memories of the flotsam. I notice once more that Kubota has a penchant for materials that reflect. By spreading them around her sculptural interventions, they echo reality to the point where we lose ourselves in time and question its meaning. When speaking to the artist and curator, as well as Bryan, being the UK counterpart to Mr. Nakata, I learnt how sheer serendipity shaped this project and how the unexpected has been embraced by Kubota and her team. First exhibited in Ikon Gallery in Birmingham, the ‘Missing Post Office’ post box was moved to Daiwa Foundation for just a month and soon it will travel further; but even the artist doesn’t know where that might be.

Text originally commissioned by This is Tomorrow available here.